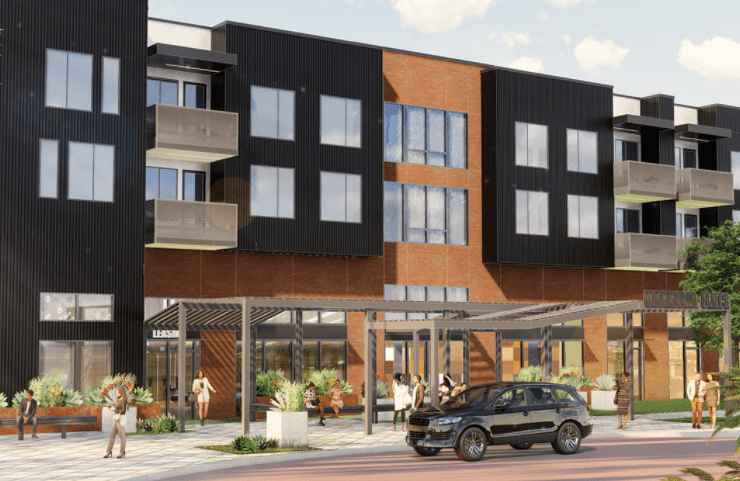 Realm Group, Newport Beach-based real estate investment and development company will build Magnolia Flats, a project with 450 new rental units in Riverside near Tyler Galleria. The project consists of a four-story residential building with studio units, one- and two-bedroom units, commercial buildings, amenities like a tot lot, a roof-top deck, and a dog park.

“Magnolia Flats will be one of the largest new multifamily projects in the Inland Empire this housing cycle,” said Andrew Sinderhoff of Land Advisors, one of the deal’s brokers.

The Realm Group’s new project will comprise a four-story identical building with 106 studio units, 173 one-bedroom units, and 171 two-bedroom units. This will relieve local employers who struggle to retain talent due to high rental prices in the Inland Empire region.

We covered this story in our Weekly Wire Round-up.

The Inland Empire has seen one of the biggest rent hikes nationwide. Earlier, we reported that  Riverside was the fastest-growing metro area, with the median rent reaching $2,112 in June, up 24.2% year-over-year.

A lack of housing units pushed the rental prices higher, which attracted investors to buy apartment complexes. Tower 16 is one such commercial real estate investment and management company that recently bought four apartment complexes in Moreno Valley and Colton.

Demand will continue to grow amid low supply.

The demand for housing in the Inland Empire will continue to grow. As a result, investors are piling up their investments in the IE region to ensure they make good money from the opportunity created by a huge imbalance between the housing demand and supply.

Cost of living and housing options for IE’s’ startups

High rental prices drive up the cost of living, and things can get so out of control for upstarts or even established companies that they can’t convince employees to move to the Inland Empire or find it difficult to fill open positions.

The recent announcement by several property investment companies to buy existing apartment buildings, refurbish them, and rent them out to new tenants may solve the problem of a lack of housing supply in the IE region. However, the rent these new buildings end up charging will determine if it helps the existing startups and businesses.

Data from a housing cost calculator Zumper, the results shared by CNBC, show that Detroit, Omaha, Austin, and Portland have the lowest rental price (for a studio apartment, for example).

Los Angeles, as well as other California state cities, such as San Francisco, Oakland, and San Jose, is in the upper quartile for rental prices.