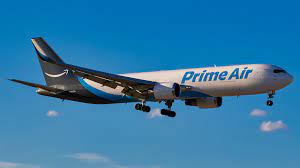 Amazon opened a new regional air hub in San Bernardino this April to provide fast delivery for customers in the Southern California region.

This is yet another addition of an air hub to Amazon’s expansive air freight network of seven air sites in the state. The 660K-square-foot sorting facility started operating at the San Bernardino International Airport. The company took over the airport facility formerly known as the Eastgate Air Cargo Logistics Center, built by San Bernardino International Airport and Hillwood Enterprises, LP, in 2019.

“One of the primary goals of the Inland Valley Development Agency and SBD International Airport is to restore jobs and economic growth to the Empire as a result of the Norton Air Force Base closure,” said Michael Burrows, executive director at the San Bernardino International Airport.

Since Amazon was involved in guiding the construction of this site. The company states, “the facility will operate a fleet of electric ground service equipment, and a solar panel rooftop is slated for installation later this year.” However, there are also lawsuits alleging that Amazon’s operations in the area will be harmful due to poorer air quality, climate, and other impacts.

Putting 70% of the US Population Within Next Day Reach

According to DePaul University, Amazon has expanded its route network, adopted sophisticated scheduling, and partnered with other airlines to bring next-day delivery to 70% of the US population. The graphic below shows how Amazon has increased its flights to and from its major air hubs, including Ontario and Riverside. The Blue lines indicate Boeing 767, and the Red lines indicate Boeing 737s, according to a study by DePaul University’s Chaddick Institute for Metropolitan Development.

However, we might see an increased number of flights now taking off from the San Bernardino air hub.

Amazon Expands its Operations in the Inland Empire

Last week Startempire Wire reported that Amazon is expanding its operations in the Inland Empire with two new fulfillment centers it plans to open in 2022. The first would be at Victorville, promising to bring over 1,000 full-time jobs to the region, with a second one to open in Ontario the same year.

However, a growing air fleet also means that Amazon might enter the business-to-consumer logistics sector sooner than later. That’s when existing behemoths of the trade, DHL, UPS, and FedEx, might get a run for their monies.