California Air Resources Board Relocates to a 19 Acres Facility in Riverside, CA 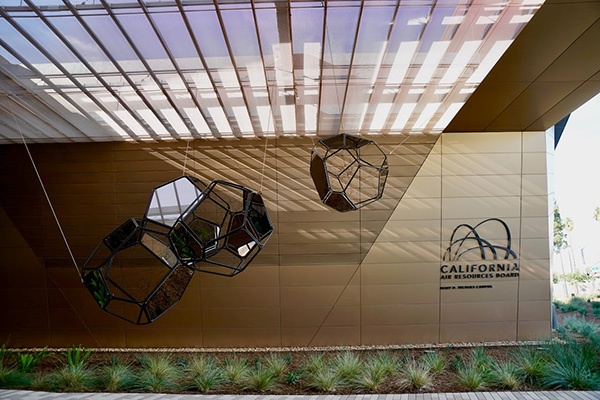 The California Air Resources Board, or CARB, has relocated its headquarters to Southern California, settling on a 19-acre piece of land on Iowa Avenue. The University of California, Riverside (UCR) previously owned the land.

“Much credit goes to our past Chairwoman Mary Nichols who was looking for land that came with possibilities,”

It was in 2016 that CARB chose this location close to UCR and The Riverside Innovation District, providing the board with land to grow its operations and have testing facilities in the coming decades.

CARB was formed in 1967 to tackle the issue of smog in California. However, the scope of its operations has expanded since then.

CARB’s new headquarters facility is built on a 19-acre tract of land with a net-zero energy laboratory. The facility complies with LEED Platinum and CalGreen Tier 2 green energy standards.

“It’s a privilege to have one of the world’s largest and most advanced testing and research facilities in our backyard, driving collaboration between UCR, CARB, and the startups who want to be near the forefront of climate leadership and innovation,” said, Councilmember Cervantes. “We’re grateful for the hundreds of high-tech, high-paying green jobs. In addition, CARB will bring to the region and look forward to supporting the board’s continued success.”

Role of CARB in Environmental Regulations

CARB has played an ever bigger role in regulating the state’s environment-related problems. For example, it recently approved Community Emissions Reduction Program for San Diego Portside Community. The board also approved a similar plan for the Southeast Los Angeles area.

However, another role it plays is in imposing fines on businesses in the state. For example, it recently fined Phillips 66 Company $200,000 for violating California’s gasoline regulation.

Another White River Marine Group had to pay $203,500 for violating CARB regulations, whereas Southern California Edison paid a $350,000 settlement for violating rules on the super pollutant.

One of the Coca-Cola bottling companies, Reyes Coca-Cola Bottling LLC, settled with CARB amounting to $137,000 for air quality violations.

The California Air Resources Board (CARB) and CALSTART announce the reopening of the popular Hybrid and Zero-Emission Truck and Bus Voucher Incentive Project (HVIP) at 10 a.m. to new voucher requests. The 2021 reopening will make available $165 million to California-based businesses that want to transform their fleets with new, zero-emission and near-zero-emission clean vehicles.

Rideshare Companies in California Begin Electrification of their Fleets

In May this year, CARB passed a regulation requiring California ride-sharing companies to the electrification of their fleets starting in 2023. The impetus behind this decision was to achieve the ambitious goal of hitting net-zero emissions by 2030.

At Startempire Wire, we previously reported that the region is home to 40K Electric Vehicles (EVs). With the CARB regulation coming into force, the number might increase above 60K in the next two years.

There are companies in the Inland Empire working to fast-track the transition toward EVs. For example, Karma Automotive opened its innovation and customization center in Moreno Valley to make customized EVs for other companies, as well as Karma’s brands of EVs.