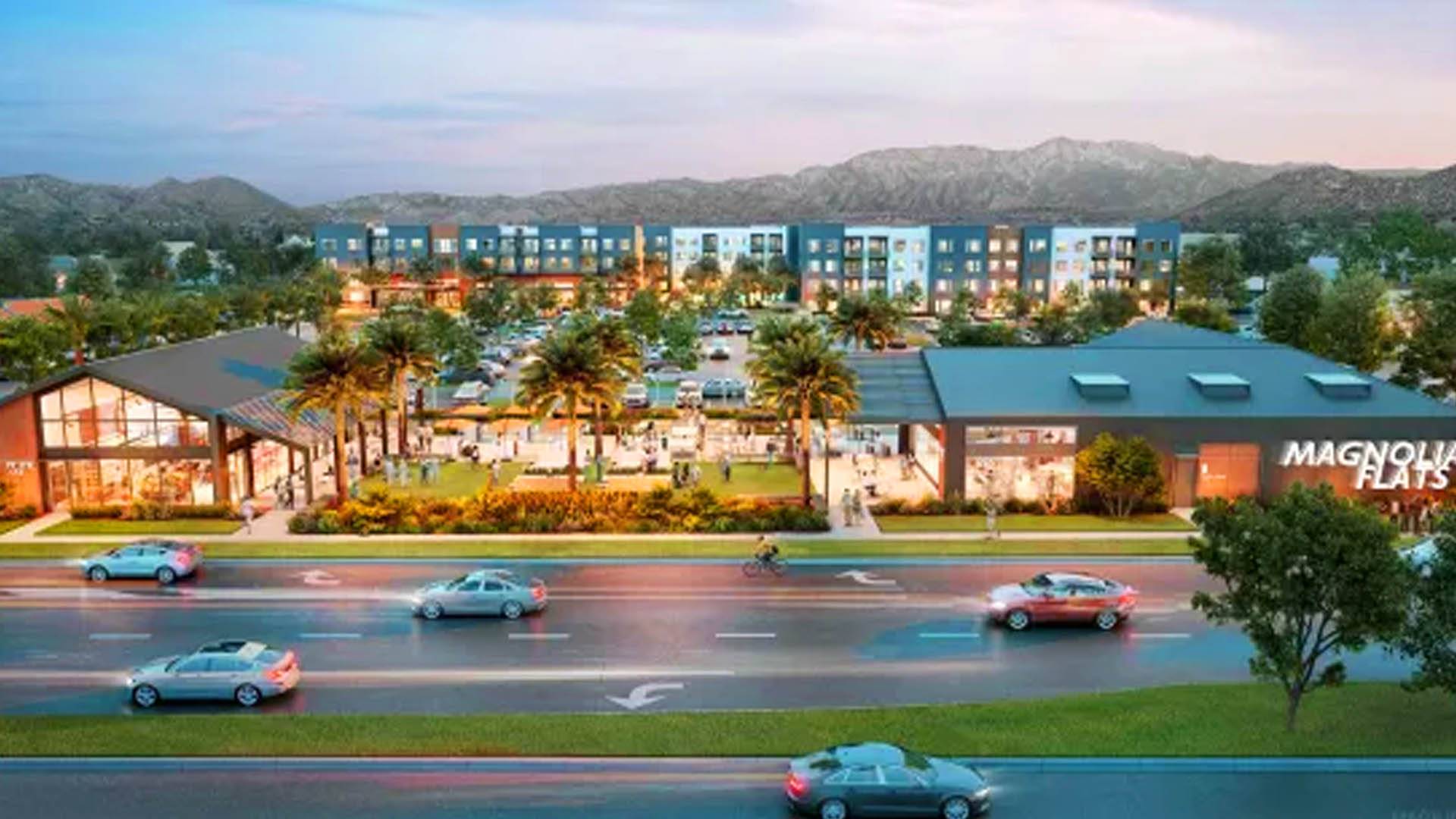 The owners of a nearby supermarket claimed it would hinder delivery truck access and customer parking at the grocery store, leading to a court order prohibiting the development of Magnolia Flats, a proposed residential and retail hub in Riverside. Developers of the project have appealed the ruling.

Realm Group, Newport Beach-based real estate investment, and development company built Magnolia Flats, a project with 450 new rental units in Riverside near Tyler Galleria. The project consists of a four-story residential building with studio units, one- and two-bedroom units, commercial facilities, and amenities like a roof-top deck and a dog park.

The Galleria at Tyler neighborhood’s Northgate Gonzalez Market owner and the land’s owners filed a lawsuit against Magnolia Partnership LLC, building the 450-unit apartment complex and 9,000-square-foot shopping center nearby. The project also includes a 67,473-square-foot park with a tot lot and a dog park.

According to the plaintiffs, Northgate Gonzalez LLC, Wilson Holdings LP, and Los Altos XXVII, the proposal breaches a 43-year-old easement signed by property owners. To prevent access and traffic flow to and from enterprises from being hampered, that agreement was made to guarantee that the site would only be utilized for commercial development.

Judge Chad Firetag of Riverside Superior Court approved the plaintiffs’ request for an injunction to halt the project in October 2021 until a deal could be reached to address the traffic and parking issues.

The Riverside City Council gave the project a conditional-use permit in February 2021. Still, as the city is not a party to the dispute, spokesman Phil Pitchford said the city has declined to comment.

According to the lawsuit, the project is allegedly just 2% commercial and 98% residential, in violation of the easement agreement. According to the plaintiffs, delivery vehicles headed for Northgate would encounter obstacles and safety risks due to the apartment complex’s building of carports and smaller roadways.

The lawsuit was filed on September 14 in Riverside Superior Court and claimed that the barriers “not only force the delivery trucks to meander through residential streets, but also change the existing route of Northgate’s commercial delivery trucks by converting existing commercial drive aisles to residential drive aisles that are only 24 feet in width.”

In addition, the complaint claims that Northgate’s customers would have to “endure a tortuous trek simply to reach the store,” endangering their continuous allegiance and increasing the likelihood of purchasing elsewhere.

“They plopped 450 residents right in the middle of this. We’re supposed to bring 18-wheelers through this?” said attorney Theodore Stream, representing the plaintiffs.

The lawsuit asserts that the proposal will obstruct customer parking at Northgate, both by construction workers using the parking lot and later by apartment complex occupants.

Magnolia Partnership said in its appeal to the Fourth District Court of Appeal dated March 22 that Judge Firetag erred in his judgment to deny the project.

According to the appellant brief, the 1979 easement agreement did not impose any limits on the land or other noncommercial property uses. Additionally, Firetag made a mistake by not classifying rental units as commercial property.

The brief states that income-producing apartment projects with more than four units were and are still considered “commercial” uses.

The defendants further assert that the easement was changed in 2005 to “expressly enable any residential activities” and to remove some usage limitations.

For the 2021–2029 Housing Element Cycle, “the city of Riverside is expected to provide a minimum of 18,415 additional housing units,” Olson stated. “More people frequenting the companies surrounding the Magnolia Property, and businesses that include the proposed Northgate Market grocery store,” he continued, was another advantage of the Magnolia project.

Riverside will benefit significantly from the proposed multifamily housing construction, according to Darrin Olson, a spokesman for Magnolia Partnership, in meeting the criteria of the state’s Regional Housing Needs Allocation.

Note: We’ll keep reporting about Magnolia Flats as this is a developing story. Magnolia Flats is a key residential establishment meant to solve the housing crisis.