Riverside County to Have a Futuristic Off-highway Vehicle (OHV) Park 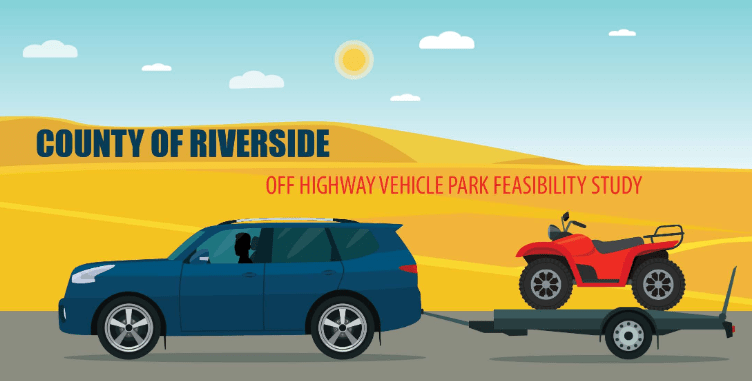 Riverside’s vast land and its short distance from a large portion of the population results in an abundance of opportunities for Off-Highway Vehicle (OHV) use.

The Riverside County Regional Park and Open Space District, in partnership with the State of California Off-Highway Motor Vehicle Recreation Division, is conducting a countywide feasibility site and selection study for a future public off-highway vehicle (OHV) park. The purpose of the study is to identify locations for a regional OHV recreation area in Riverside County.

The first level of feasibility analysis identified a set of 12 potential sites throughout Riverside County for consideration as a future public off-highway vehicle (OHV) park.

The first off-road vehicle sports event took place in 1973 at Riverside Raceway. Popular motor sports website Motor Trend wrote that “from Jimmy Clark of Formula One fame, to AJ Foyt, considered one of the best racers of all time, to four-time Indy winner Rick Mears, Parnelli Jones, Dan Gurney—all the greats ran at Riverside. Add to that Bobby Ferro, Walker Evans and Roger Mears—the list is quite huge of all the class winners that ever ran there.”

Before becoming part of the newly incorporated City of Moreno Valley, the Riverside International Raceway, or RIR was a frequent filming location for Hollywood movies, television series and commercials. CHiPs (used as both a stand in for Phoenix International Raceway and Riverside itself for the episode Drive, Lady, Drive), Simon and Simon, The Rockford Files, The Fall Guy, The F.B.I., Hardcastle & McCormick, and Knight Rider filmed their on-location shots at RIR.

Build-to-Rent Townhomes Come to the Riverside County: Land brokerage company based in Irvine; The Hoffman Company has sold 26-acres of land that Sancerra Communities and STG Capital Partners will use to build a rent-only townhome community in Southwest Riverside County, California.

Pests cause a 20-40% loss of agricultural production worldwide, according to Food and Agriculture Organization of the United Nations (FAO). The organization estimates that “plant diseases cost the global economy around $220 billion, and invasive insects around US$70 billion“.

Riverside, California-based agtech startup FarmSense, founded in 2016, is tackling this problem of crop pest monitoring through its FlightSensor that uses novel optical sensor technology to automate the process of real-time insect classification and counting.