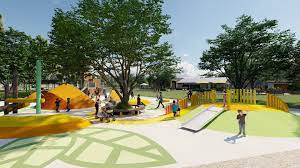 Ontario plans to build a 370-acre new city park, reports Steve Scauzillo. Known as The Great Park, the proposed project is approximately 340 acres with a length of 3.7 miles, encompasses roughly 400 acres, and extends over 3-1/2 miles.

370-Acre Next to Ontario Ranch

Ontario Ranch is next to the proposed 370-Acres Ontario Great Park, an adjacent community that will eventually be home to 47,000 residential units, plus office, commercial, and industrial space.

“In later phases, development would include athletic fields, places for historical and cultural exhibits, museums, community facilities and areas for social gatherings, such as a farmers markets and pop-up dining spaces.”

Land Planning by The Galloway Group

The site will include 320+ acres and a 146 gross acre regionally oriented City park, which provided the project name and an unmatched onsite amenity for the proposed Community, including a future high school campus and an elementary school.

The Galloway Group is an Irvine, California-based real estate development/design consulting firm. It specializes in strategic land planning, site planning, and community and design consulting services for developers and builders throughout the United States and Mexico.

Inspiring Developments in the Inland Empire and Around the World

We reported in September last year that Saudi Arabia is developing a mega-project in real estate development. It’s called the ‘Neom City.’

The ‘mega-city’ project in Saudi Arabia has plans to have flying cars and other advanced technologies. The city will be deep in a desert bordering the Red Sea. Until now, the country has pledged $500 billion to build the city of the future.

Per details obtained by the Wall Street Journal, the city will have artificial rain, a fake moon, robotic maids, and holographic teachers. Only time will tell how much of it is useful and contributes to advancing tech in the country. NEOM will be 33 times the size of New York City, according to Business Insider.

You can read the complete article here.

Another development we reported on is ‘build-to-rent’ homes in California. Irvine-based land brokerage firm The Hoffman Company has sold 26 acres of land that Sancerra Communities and STG Capital Partners will use to build a rent-only townhome community in Southwest Riverside County, California.

Lastly, you may read about the Riverside Innovation District, a broader vision-oriented project aiming to uplift the whole area. Entrepreneurship, employment, entertainment, and housing are all in one place. This is the vision for Riverside’s Innovation District.

The idea behind Riverside Innovation District is to make the most of the existing assets in the City to attract private investment and make the county a hub for startups and entrepreneurs.

Opportunities to Advance Sustainability, Innovation, and Social Inclusion, or OASIS, is an innovation park funded by UCR. It will serve as a hub of innovation, incubation, and research in clean energy, social mobility, intelligent transportation, agriculture, and natural resources management.