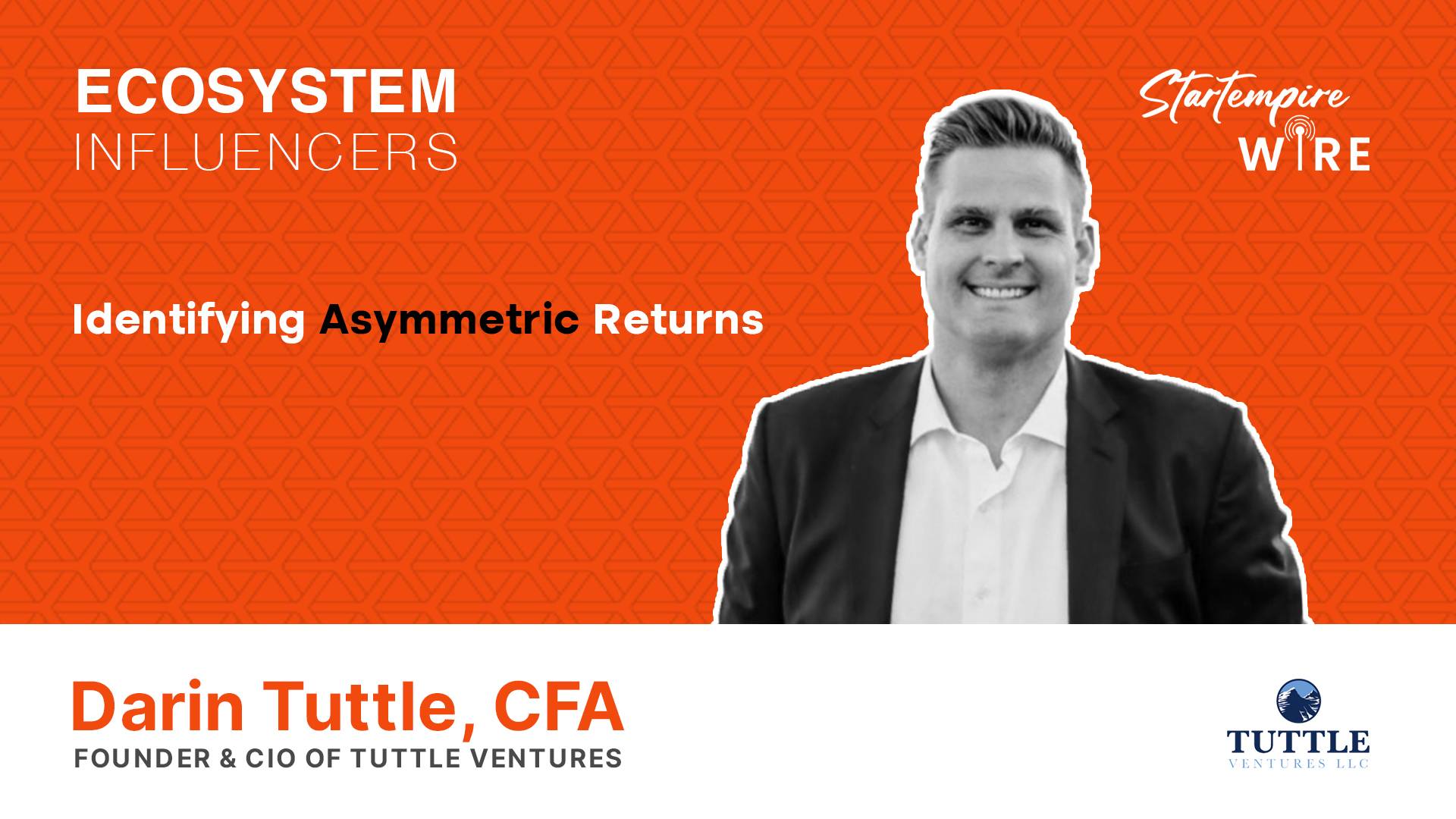 Startempire Wire’s founder Verious Smith III sat down with Darin Tuttle, Founder & CIO of Tuttle Ventures, and talked about Darin’s journey as an investment advisor and his journey in the business field.

Here’s an edited version of the Q&A session where Darin touched upon how to find an investment-worthy company, his favorite books on finding the right companies to invest in, and his advice to first-time entrepreneurs.

Verious Smith: Tell us a little bit about yourself. The first part of that is, who are you?

Verious Smith: Where are you initially from?

Darin Tuttle: I grew up in a small, suburban town in Sacramento, El Dorado Hills. I’ve always had my heart in Northern California. Moving to Southern California has been a bit of a stretch for me. It’s almost like two different states, but I’ve always loved playing basketball, football, and volleyball growing up outdoors. We were never too far away from skiing down the slopes or going to the beach at any time. [Being outdoors] is one of the main reasons why I love living in California

Verious Smith: So why did you move to the inland empire and, more specifically, the city of Corona?

Darin Tuttle: I came out initially for a job in portfolio management. I had been living in Arizona at the time with my family we had been looking at other portfolio management roles, but none that allowed me to act as the Director of Investments. I’ve been professionally managing money here for about the last decade. I had never heard of the Inland Empire. Once I came out here and saw the sunshine, the community, and the people, it just took the cake for me in making the final decision.

Verious Smith: Nice. So tell us a little about your book, “The Winner’s Blueprint” what is that about?

Darin Tuttle: The Winner’s Blueprint is a book that breaks down the fundamental characteristics that make up a winner. I’m a former college athlete. I played college football with many players still playing in the NFL today. There was just an attitude that some people have or possess that allows them to be able to overcome obstacles that allow them to be able to leverage their skills to the best of their ability. So in writing The Winners Blueprint, I synthesized the ten most important aspects that I thought went into a winning mindset.

A Book that Influenced Darin Tuttle

Verious Smith: Name one person who had the most profound impact on your thinking and your career trajectory.

Darin Tuttle: That’s a hard one. I have to choose one. Me, I was a Mormon missionary in Africa for two years. And when I was in Africa, there were all these scripture books that I had to read, the Bible, and many religious texts. But then, in the house that we were living in.

There was a book by George Friedman. It was called "The Next 100 Years," and George Friedman probably impacted me the most. As a young individual growing up and learning was my place in the world. He talks a lot about geopolitics… Click To Tweet

Verious Smith: I’m going to have to check that book out.

Darin Tuttle: I think Warren Buffet is right; he has a lot of great headline quotes. You know, when we are structuring an investment portfolio, we’re looking, not at like a whole index, like I’m not trying to make a judgment on the entire market. Still, I’m trying to find companies with asymmetric return profiles. And what I mean by asymmetric return profiles is that there is an opportunity for exponential growth with low downside risk.

Darin Tuttle: That’s a good question. I think one of the first ones is, you know, checking the incentives. So ask, how are you getting paid? Most of the time, an advisor will be able to articulate to you how they get paid if he’s doing his job right. If they try to brush over it or not make it as clear, you know, that may be something you want to pass on.

Verious Smith: Do you have a, like a few, maybe top three beginner investor books you would recommend?

Darin Tuttle: I think there’s one that you know, they say that once you’ve read one investing book, you read them all. I liked “The Behavioral Investor” by Daniel Crosby. He reflects on how your behavior can impact your investment because it’s not just picking the right stocks or index funds. Sometimes you have to combat your investor psychology. There’s another one that I like. It’s called “Quality Investing,” owning the best companies for the long-term, and that’s by an author named Lawrence Cunningham.

And they have this rare insight to have a unique perspective on quality investing that you may not hear from other places.

Verious Smith: Awesome. And so you, those two quality investing, and what was the first?

Darin Tuttle: Oh, yeah. The first one is the behavioral investor. Yeah. The next one is Quality Investing. And then the third one, I would say, is probably the little book that builds wealth. And that’s by pat Dorsey. He’s kind of more of the traditional route toxic. Building, you know, moats around companies and their competitive advantages, right?

Verious Smith: So this leads right into the next question. Do you have any startups in your portfolio of investments, and would you like to talk about any of those?

Darin Tuttle: Yeah, so, so not only do we invest on the public side, but we also invest on the private side, and these are mostly direct deals that we work with the founders on. So it’s not a large portion of our investment portfolio, but it is an important aspect.

Verious Smith: Wow. You were telling me about that company. All right. Do you have any more you would like to talk about?

Darin Tuttle: You know, I think another pretty interesting one is The Wormhole App. Now, this is essentially the easiest way to share files from person to person.

You only need a link, and you don’t need to download any cloud software. You can send up to 10 gigs through. Your browser to phones or email, it’s end-to-end encrypted. And so, you know, it’s safe as long as you trust the sender, and it happens instantaneously.

So you can start downloading something that gets sent right away. Super fast and works way better than competitors like Dropbox or Google.

Verious Smith: Okay. So the next question would be, what can startup founders do early on to prepare to raise future funds?

Darin Tuttle: Yeah. I’m a big proponent of measuring twice and cutting once, meaning that you build a need, sell, and sell that need if you solve the customer’s issue or problem immediately. And then you don’t have to worry about adding features later or do they like this or do they not like this, you know, fix that number one top-of-mind need and then go out and sell that.

Verious Smith: Nice. So you, you think that’ll make them more fundable?

Maybe I do have strep throat. My throat was hurting, but I needed to deal with this broken leg. It was starting to hurt. And so I think often founders try to push a solution onto a customer rather than listening to that customer and solving that immediate need right away.

Verious Smith: What message would you give to entrepreneurs looking to grow their startups locally?

Darin Tuttle: Yeah. I would say number one is finding your tribe. Find your group of people. It gives you energy, excites you, and makes you want to work on your business more. Find those people that lift you rather than bring you down. So get connected with your tribe. I think that’s number one.

I would say number one is finding your tribe. Find your group of people. It gives you energy, excites you, and makes you want to work on your business more. Find those people that lift you rather than bring you down. So get… Click To Tweet

Number two, I think, is leveraging the tools of social media. I know that social media has been a big proponent of my growth over the last couple of years. We just had, I think it was 275,000 impressions on Twitter just recently. So that was a big milestone for us. But I think those two are great to be able to kind of tap into what we have here in the inland empire and the future going forward.