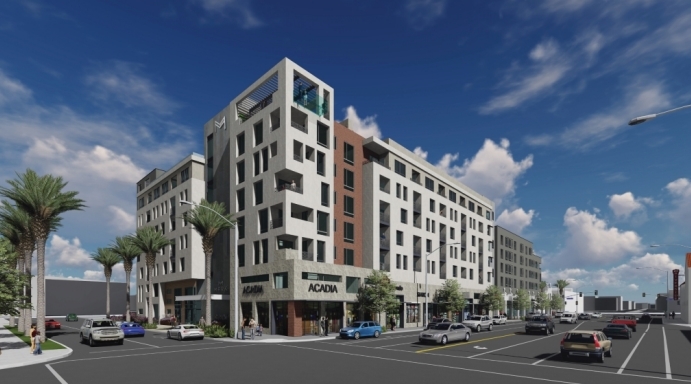 Construction on The Mark, located at Mission Inn Avenue and Market Street in Riverside’s downtown historic district, is about to be finished. The location, which once housed Riverside’s first fire station, a livery stable, and an automobile dealership, is now undergoing redevelopment and will soon be revived as a mixed-use seven-story community building that honors the three historic structures.

Two restaurants, a café, and boutique stores will still be housed in their original storefronts, which will be renovated, bringing life to the downtown area. The historical components that make this place distinctive are preserved in this way.

The Mark is a building in Riverside city’s downtown. Within 0.5 miles, three retail malls are located here. Additionally, there are five parks within 9.9 miles, including the Mary Vagle Nature Center, Louis Robidoux Nature Center, and the UCR Botanic Gardens.

These apartments will have four categories: studio, one-bedroom, two-bedroom, and three-bedroom.

Here’s what residents will find within Mark:

In 2017, it was decided that the old Stalder Plaza would be transformed into a mixed-use, multi-story residential/commercial structure with underground parking, 22,000 square feet of restaurants and shops, and 165 rental apartments. This project is now named Mark Apartments.

The Stalder Building is a crucial component of Mission Inn Avenue’s historic cityscape of unparalleled beauty. A single facade joined three buildings to form the Stalder Building. After constructing the facade in 1926, Gordon Stalder gave the structure its name.

In august 2022 Startempire wire also reported that three multifamily properties in the Inland Empire totaling 286 units are up for refinancing for $27 million by the Northmarq San Diego regional office.

The Hoffman Company Facilitates the Sale of a 482-unit Apartment Project in Riverside.

We also reported that a brokerage firm, The Hoffman Company, completed the sale of a 482-unit apartment complex on about 18 acres that is a part of the larger 35-acre “The Exchange” mixed-use development.

The historic, unmatched splendor of Mission Inn Avenue’s streetscape depends heavily on the Stalder Building. Mark Apartments is the new name for Stalder Plaza. The Mark Apartments will be situated in Riverside’s downtown historic neighborhood at Market Street and Mission Inn Avenue. The original storefronts of two restaurants, a café, and boutique shops will be refurbished while remaining home to these businesses. These apartments will come in four different categories: studio, one bedroom, two bedrooms, and three bedrooms. It’s a Mark Apartment in Riverside with 7 Stories.